Video Games and IT 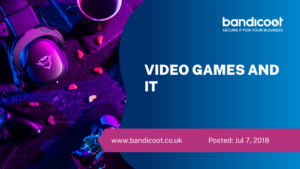 Next week, on July 8th, it’s Video Game Day. http://www.holidayscalendar.com/months/july/ According to psychologists, video gaming is really, really bad for you, particularly children. Their brains become over stimulated, the nervous system revs up a gear and blood pressure rises, all of which leads to a melting pot perfect for outbursts of rage and temper, frustration and tantrums. So, you ask, why on earth is there a ‘Day’ to celebrate this for heaven’s sake?

Well what if we were to tell you that there are many positives to Video Gaming, from improving cognitive ability, to contributing massively to the economy and overall playing a part in changes in Information Technology in the digital age, and vise versa?

Don’t believe us? Read on to find out more!

Video games have been around since the 1970’s, Atari first introduced Pong in to commercial arcades back in 1972, but it was 1975 when they developed the first arcade game to be played at home, and by 1977, the first Atari consoles were on children’s birthday and Christmas lists, sparking excitement everywhere!

These consoles were a revolution back in the day, and it was full on eager anticipation when you got a new game cartridge, inserted it in to the console and you had Space Invaders, or Pac-Man staring back at you, inviting you in to this new world, challenging your dexterity and hand to eye co-ordination in your own front room.

Fast forward to 2018 and Video Games have come a very long way since the 70’s.  With the animation becoming more and more lifelike and AI leading to more personalised play for gamers everywhere.

Gaming in the 21st Century is now a multi-billion-pound industry, with an audience of up to 2.6 billion users worldwide. The figures are literally staggering!

And as of June this year, there was a whopping 2,261 gaming companies within the UK alone.

The Positive Side of Gaming

Of course what this means is the Gaming industry employs many thousands of people across the UK, and moreover, there are loads of different roles available. Whether that be in designing the software, and being involved in the animation, to manufacturing and production, marketing and sales roles, or writing reviews in one of the many gaming magazines or on social media.

Gaming also contributes millions of pounds to the UK economy, and has a huge ripple effect within the IT industry as a whole, digital images and sound has become far more sophisticated and communication networks, (i.e. mobile phones and broadband), are key drivers to the gaming industry, meaning IT support is particularly relevant, not just for businesses but in the home also.

In addition to the economic factors, Gaming can lead to improved cognitive functioning.

Research has demonstrated that people who engage in gaming regularly have improved spatial attention, it improves their ability to track objects even when there are lots of distractions, helps people to overcome an inability to cope with multiple tasks, improves mental flexibility, can reverse mental decline that comes with aging and can even help overcome dyslexia!

Furthermore, you may think of Gamers and conjure up images of sad, lonely spotty teenagers in their bedrooms, unable to socialise or connect.

You need to dispel this image straight away, for there are whole Gaming communities out there, connecting worldwide and communicating via gaming.

You could be sat playing chess in the comfort of your Burnley home against your opponent who is somewhere in Russia! Gaming is truly international!

Believe it or not, the average gamer is aged 35 years old, and not just male. Females play a significant part in the gaming industry, and there are more and more games that are designed to appeal to women and girls everywhere!

The Future of Gaming

So what does the future of video games look like?

Well, industry experts suggest the rate of growth will continue, in fact the turnover by 2023 is set to be an astounding £285 billion! There will be continued advances in the hardware and virtual reality is set to grow, with dedicated arcades and even VR theme parks on the horizon!

Fitness will also benefit from advances in IT and Gaming. The Wii Fit was first introduced in 2007, now there are Apps and wearables and tech to suit almost anybody, and again virtual reality will play a massive part in the future of fitness and IT.

There are also of course, emerging markets such as India, where gaming is growing at an astonishing rate.

This is predominantly driven by more people having Smartphones and access to new technologies, driving the market upwards in excess of a billion pounds by 2021, from £360 million where it currently stands. This will naturally lead to opportunities for developers, designers, and IT specialists. There will be demands for greater internet speed and more economic competition, leading to the growth continuing beyond 2022.

And so, as we suddenly begin to appreciate just how much Gaming contributes to the global economy, and to the IT industry as a whole, we suddenly realise that actually, yes, it’s not a bad idea to have a Video Game day, to celebrate all that is good about Gaming!

If like us, you are curious about the gaming world and how it affects the IT Industry , or you want support with your mobiles and connectivity, you can contact us here, where a member of our highly skilled IT Support professionals are waiting to help you.