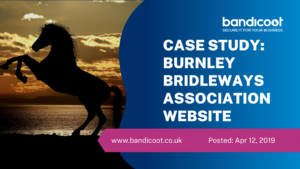 We often talk generally about the websites that we design and build here at Bandicoot, but not often do we actually give you an example of what we can do.

Well, last month, thanks to a personal connection, we launched this website for the Burnley Bridleways Association, all designed and built by the fabulously talented Bandicoot team.

OK, we’ll admit, this isn’t the most technologically advanced website in the world – it doesn’t have many fandangled hi-tech features and it’s not going to set the world on fire – but it is related to a cause close to our hearts, and it demonstrates just what we can pull off with a tiny budget and only a little bit of time.

Plus, having said that, it nevertheless has some useful features that enable this website to serve an important function and, all in all, we’re really rather proud of it.

Who Are Burnley Bridleways Association?

The Burnley Bridleways Association (BBA) was formed in 1970 by local equestrian enthusiasts, specifically Norman Bishop, Mary-Jo Pinder and Mary, later Lady Towneley. At the time, there were many more horses and ponies in the Lancashire countryside than there are today, both used for leisure and for work purposes, however the bridleways in and around Burnley were slowly being closed or lost in the mists of time.

The BBA decided to change all of that and work to halt the fencing off of public rights of way – a practice that farmers and land owners were taking up with gusto – in order to ensure that these important features of the countryside remained open for generations of horse riders (and ramblers and cyclists) to come.

Almost 50 years later, the BBA is still fighting the same fight. Now led by Cosima Townley, the daughter of Sir Simon Towneley and the late Lady Mary Towneley and a local Councillor and prominent countryside campaigner, the BBA is still going strong and still fighting to get the bridleways around the Borough of Burnley catalogued, re-opened and secured.

In fact, despite the decades of hard work by many people working to preserve the Great British countryside for everyone to use, the irony is that our bridleways are more under threat now than at any other time. Part II of the Countryside and Rights of Way Act 2000 means that historical footpaths and bridleways, which came into existence before 1949 but which have not been recorded on the definitive map and statement by 1 January 2026, may be extinguished.

Hence, the BBA needed a website that would enable them to reach out to the local population and enlist their help, to ensure our precious bridleways are recorded and preserved for the benefit of all.

Hence, recognising the need for an online presence that would enable the BBA to reach new audiences, as well as foster better loyalty and more engagement from their existing audience, Cosima Towneley, Chair of Burnley Bridleways Association, approached Bandicoot.

Cosima knew that the BBA required a website that would serve several purposes; to inspire horse riders to keep riding the fantastic bridleways in and around Burnley, to educate riders about the role of bridleways and the threat faced by them, and to galvanise riders into action to save those routes that are under threat.

Cosima thus approached Bandicoot with this brief and we sprang into action to design and build a website that would do all of these things.

The website that we eventually launched – even if we do say so ourselves – manages to achieve all of the objectives set for it.

Mixing old and new beautifully, the website pays tribute to the work of the founders of the BBA and the history of the organisation to date, by featuring some historical information alongside some great photos. However, the website is not merely a history lesson, as it also features recent photos of riders out on the bridleways of Burnley and brings the project bang up-to-date.

Thanks to the various sections and functionality of the website, visitors can now be informed about what is happening locally and enter events arranged by the Association via an Events page, they can be kept up-to-date about local bridleway routes and the current legal position related to them thanks to a Guides and Maps section, and they can be also be educated about what they need to do to keep their local routes open via a Get Involved section.

Visitors can even expand their knowledge further by purchasing relevant books thanks to a small ecommerce section under Books!

Community engagement is further encouraged thanks to the Member’s Area, where members can contribute to the blog and upload images of routes they are riding, which can then be used by the group to prove use and keep threatened bridleways open.

What’s more, the new website has automated the membership and renewal process, which has taken a massive administrative burden away from Cosima herself and now means the entire thing can be managed much more smoothly and efficiently.

All in all, the new website has created a much better experience for both the organisers of the BBA and the individual members, which is precisely what a website should do!

Why Do Bandicoot Care About Burnley Bridleways Association?

As we’ve already mentioned, the BBA is a cause close to our hearts, mainly thanks to Anna Bowen, one of Bandicoot’s Director’s.

As a keen horse rider, Anna is often to be found riding her trusty stead around the Burnley countryside, and so being able to have plenty of places to ride safely is important to her and, as a result, the rest of the team.

Plus, although not all of the IT geeks here at Bandicoot might be overly fond of horses, we do all believe that our bridleways should be kept open for the benefit of all the community and for the future generations.

Anna is a member of the BBA herself and, as such, was delighted to work with Cosima Townley on this project. When asked for her feedback, Cosima stated;

“Thank you so much everyone at Bandicoot. This had been something on my mind for such a long time but, due to a bit of ‘technophobia’, it always got put to the bottom of the list in the hope it would go away!!! However, you nurtured me through the process with great patience and I am simply amazed at what you came up with. It looks stunning, professional, easy to use, inviting and informative. I only hope I can keep it up to the high standard you designed it to be. I could not recommend a company and its people more.

In the meantime, here’s to encouraging others to join the site, the group and the cause because whilst “the air of heaven is that which blows between a horses’ ears”, those bridleways will not mend or open themselves. Thank you all.”

As we hope you can tell from that testimonial, Bandicoot genuinely care about the clients we work with and we always do our utmost to ensure the process is swift and painless for everyone. Whether you know exactly what you want or have absolutely no idea where to even begin, we can take all the stress away from you and just make sure you end up with a website that does what you need it to do.

If you’d like to find out more about how Bandicoot could help you with your web design project, then get in touch with us today. You can contact us by phoning 01282 506 616 or emailing info@bandicoot.co.uk.