How Will Brexit affect IT? 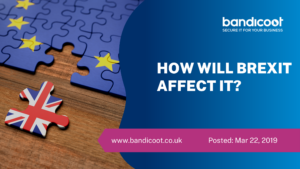 So, here we are, one week before Brexit and with absolutely no idea what is going to happen, or therefore how will Brexit affect I.T, after 29th March.

As we write this blog, the situation is changing by the day, literally, and so by the time this is published it could already be out of date!

There are certain areas we can look at however, that examine the impact of Brexit on I.T up to this point, and the possibilities of how it will be affected post Brexit. But the fundamental point is, there is huge uncertainty as we all know around Brexit, and so the caveat on this blog piece is that for now anyway, everything is still open to interpretation and clarification!

So, the big thing about all of this is Uncertainty, but we will give it a go. Want to find out more about how will Brexit (possibly), affect I.T ..?

The Financial Impact of Brexit on the I.T Sector

The main impact has come from a reduction in global spending on I.T products and services, with the U.K being the worst hit.

Following an original predicted rise in 2016 prior to the infamous vote on June 23rd (almost three years ago now), the U.K I.T spending market was actually re-predicted to be in a negative position, with ‘discretionary spend’ being the worst affected.

Fast forward a couple of years to 2018 and in the cold light of day the impact of Brexit on the economy as a whole does not make for a pleasant read.

Information released in December of last year reveals that sterling is weak, the U.K property market has seen a slump reminiscent of house purchase levels of 2012 following the economic crash, and household savings are at there lowest levels on record. All of which has a knock-on effect on the I.T market as consumers tighten their belts and buckle up for a potentially bumpy ride through the coming months or even years.

Some of the hardest hit sectors within the economy have been the automotive industry, the airline industry, the financial services sector and the pharmaceutical sector. This is largely down to the close working relationships with Europe that have been built up over the last forty or so years and that can not be unravelled all that easily.

For example, car parts are brought in from all over Europe, made in to engines, shipped back to the EU to be put in to cars then shipped BACK again to be sold in the UK. The airline industry has seen unprecedented growth thanks to people having more leisure time and business being operated on a global scale. The Pharmaceutical industry will also see issues with importing medicines and regulation problems which will take up valuable time, and the financial services sector has suffered as investors are moving their capital to safer shores.

The I.T industry which relies heavily on innovation and new technology does not come out of this unholy mess unscathed either.

What will happen to Technology and Innovation post Brexit?

Again, the key thing to remember is the uncertainty of the whole situation right now.

Telecoms and media will potentially be impacted, (for example the introduction of roaming charges again for travellers from the U.K to the remaining 27  member states), the GDPR regulations could be affected, and consumer and commercial laws stand to be brought in to question. In a more detailed report that goes on to put forward the effects on intellectual property including design rights and trade mark rights, there are clear indications that technology and innovation could also be in for a bumpy ride.

The other aspects that need to be considered are the lack of new skills and innovation coming to the U.K if Freedom of Movement stops in a post-Brexit world. The potential of a skill shortage could also drive up wage demands meaning that companies will look to outsource work, but then there is the continued problem of the value of currency and how this will impact on businesses in the I.T Sector.

In addition start-up companies will potentially be hardest hit, meaning that new innovators and I.T entrepreneurs will launch their businesses where there is the most amount of investment and where they are most likely to succeed.

Is it all Bad News from Brexit?

There are some however who don’t believe it’s all bad news for the U.K ahead of us leaving the EU.

In the area of scientific research, it has been debated that the UK could benefit from the lack of bureaucracy in the areas of stem cell research and GMO which are currently inhibited by EU regulations.

So as you can see, the one thing that is certain about the whole Brexit scenario currently is the uncertainty! Businesses are finding it difficult to plan any kind of strategy and therefore have to look at worst case scenarios but hope for a better outcome in the long term. Meanwhile the way forward for us here at Bandicoot is to Keep Calm and Carry on as the saying goes, and offer reliability and stability for businesses who need I.T. Support in these difficult times!

If this is you, and you are a business in East Lancashire who needs I.T Support, ranging from connectivity to phones to websites or from GDPR to Office 365 you can contact us here or call us on 01282 506 616 to discuss your requirements.

We promise not to discuss Brexit, (unless you want to), and we promise you absolutely no uncertainty in the level of service you will receive.

Unlike our current negotiators on the B word….