Is AI A Threat To Traditional IT? 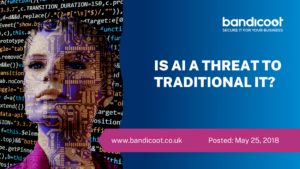 Artificial Intelligence. Is it brilliant – the next genius technology that will save mankind? Or is it dangerous – the biggest threat to our humanity we’ve ever faced, and one which might ultimately destroy us?

Well, how you see or answer that question might very well depend a lot on whether you’re a glass half full or a glass half empty kind of person…or how many times you’ve seen the Terminator films…your vision of the future very much depends on your outlook on life.

Nevertheless, we’ve heard rumours recently that AI might be after our jobs, and if that were indeed to be the case, we’d be more likely to come down on the side of the argument that AI might not be all it’s cracked up to be.

But is it rumour and hype, or is this a genuine possibility? Let’s take a quick look at the evidence.

If we’re prepared to move away from science fiction just for a minute and get away from the idea of humanoid robots taking over our governments, then AI at its very core is really quite a simple notion. In fact, far from being a terrifying prospect, AI mostly just refers to computers that can perform tasks.

Wikipedia defines it as follows;

“Artificial intelligence (AI, also machine intelligence, MI) is intelligence demonstrated by machines, in contrast to the natural intelligence (NI) displayed by humans and other animals. In computer science, AI research is defined as the study of “intelligent agents”: any device that perceives its environment and takes actions that maximize its chance of successfully achieving its goals. Colloquially, the term “artificial intelligence” is applied when a machine mimics “cognitive” functions that humans associate with other human minds, such as “learning” and “problem solving”.”

It’s also easy to think of AI as being something futuristic – something that will come upon us at the break of a new dawn and change our worlds forever (sorry, I really have been watching too much science fiction) – but in reality we’ve been living with AI for years now. In fact, AI is all around us, in our everyday lives and even in our homes.

Have you got a bank account or credit card? The fraud detection system that monitors it is AI. Ever bought anything online and been told ‘if you liked that you’ll also like this’, or used Netflix or Amazon Prime to get movie or music recommendations? The system that works out what you might also like is AI. Ever played a video game? They use AI all the time. And of course, our favourite household devices, such as Alexa and Siri, are embedded in our homes and using AI to answer our daily questions.

In fact, in a million ways every single day, you’ll be making use of Artificial Intelligence, and the frequency and places in which you’ll find it are increasing all the time.

Is AI Encroaching On The Workplace?

One such place where AI is becoming ever more prevalent is, of course, the workplace. Since the time of the industrial revolution and the Luddites, human beings have been concerned that machines are going to take their jobs and, quite frankly, they have. Once upon a time, millions of humans were employed doing mundane and repetitive tasks that machines or computers now do for us, supposedly freeing us up to do the more productive or complex jobs and roles. And this progression is only set to continue.

What’s more, it’s happening quickly too; in fact, according to a study by Forrester in 2016, “cognitive technologies such as robots, artificial intelligence (AI), machine learning, and automation will replace 7% of US jobs by 2025”. That’s 22.7 million jobs that are likely to be performed by AI in just 7 years from now. That’s a lot of jobs that won’t require a human anymore.

How Will AI Effect The IT Industry?

Naturally, the IT sector is on the front line of this, and not purely because it’s our industry that is developing the technology for AI in the first place.

No, when you take a critical look at the IT services industry as a whole, it’s easy to see that much of it is made up of repetitive jobs, which an AI machine would be capable of performing much more efficiently and cheaply.

For example, many jobs in IT support call centres will be made redundant as bots become much more sophisticated at solving simple IT issues. Think about when you engage with one of those pop-up conversation boxes on websites; those bots are already able to interpret your question and direct you to the most appropriate answer on the website, immediately cutting to a fraction the number of genuinely difficult calls an IT support worker will need to deal with. After all, it doesn’t need a complex robot to be able to tell you to switch it off and switch it on again!

Hence, many in the IT services sector see AI as a threat; as AI becomes ever more intelligent, it will naturally swallow up the jobs that don’t require all that much brain power. But is that a good or a bad thing?

How Can IT Companies Survive AI?

As I said at the top, you can look on the encroachment of AI into the IT services industry as a good or a bad thing, depending on your view on the world (or how many times you’ve watched The Terminator), however there is little point in fighting it, so you may as well embrace it.

AI is coming whether you like it or not, so there’s little point in being a Luddite and trying to smash the system. You might as well embrace it and try to see it as a positive move.

For example, if AI is going to take all the mundane, repetitive tasks, then great! Let it do the boring jobs, and train yourself and your team to do the more creative roles. OK, machines will be able to do simple and repetitive tasks, such as solving simple IT queries and ordering more stock, but they won’t be able to do the things that require more complex thought processes or a streak of creativity, such as devising a new IT support system altogether. Well, not for a while yet, anyway.

Also, never forget that the world will always need humans to fix the AI computers and machines themselves, when they break down, so it’s probably fair to say that our jobs are reasonably safe for the time being, even if they may not look exactly the same as they do now.

Well, we hope so anyway!

If you’d like to find out more about the changing world of AI and what might be on the horizon, then please do get in touch with us today. You can contact us by phoning 01282 506 616, emailing info@bandicoot.co.uk, or filling out the contact form on the website and we’ll get back to you ASAP.