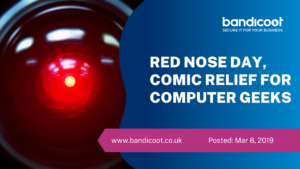 Launched in 1988 as a support to Comic Relief, this record-breaking charitable occasion sees a variety of comedians, television hosts, pop stars and people from contemporary popular culture take part in numerous fund-raising events across the U.K; culminating in a live screening on a Friday night, usually the closest to St Patricks Day.

Of course, it’s not just the celebs who take part.

Events take place up and down the country, from people taking a bath in Baked Beans, to Danceathons, to hitch hiking with a fridge, the more outrageous fundraiser event the better, it seems, is the order of the day for some!

But not everybody wants to hitch hike with a fridge! It certainly wouldn’t be our idea of a fun way to spend a weekend!

So, what other ideas are there for raising a shed load of cash for a worthy cause, especially for those of us who are computer geeks and technology Wizz kids?

Want to find out more? Read on…

Where Does the Money Go from Red Nose Day?

Before we mull over ideas for fund raising, it’s important to realise why people get involved in this iconic event.

Red Nose Day was originally launched in 1988 by the genius comedy script writer Richard Curtis and the ever youthful and legendary comedian Lenny Henry.

The purpose was to raise funds for children in need and those in poverty across the globe, with the first ever event seeing Lenny Henry visit Ethiopia in February of that year, over 30 million people tuning in to BBC to watch and over 15 million pounds raised for good causes.

Over the years, the great and the good and the very famous have participated in presenting the program, writing and producing sketches, (who can forget THAT kiss between Hugh Grant and Dawn French?), and highlighting the plight of some of the most vulnerable children and young people around the world.

Of course, we would all like to take time out and climb Kilimanjaro, (wouldn’t we?), but it’s not always that easy, especially with work and family commitments, and raising funds in times of austerity is not always as straightforward as we’d like it to be either! So what can we do?

Trying to come up with something original and funny, (the emphasis for Red Nose Day has always been the comedy aspect), takes some thought power and advance planning.

There are however some very easy ways to get the office to join in, TK Maxx for example, always support Red Nose Day by selling the T-shirts which you can view here, and there are loads of different designs. You could run a secret t-shirt sweep and buy each other a different design or buy a load and wear them back to front for the day, and knowing they are made from Fair Trade Cotton is a bonus too!

And what about the Red Noses themselves? No self-respecting Computer guru would not adorn his or her P.C with a giant Red Nose to support Comic Relief surely? Or if it won’t fit on your P.C. you could find somewhere particularly conspicuous in the office so everybody can see you support a great cause.

If you want to do something more personal, why not organise a FIFA-thon? Just get loads of your mates to bring their X Boxes round and get ready for kick off! Don’t forget though that the whole point is to raise money for vulnerable kids, so try to get some kind of sponsorship, or charge a nominal fee for people to join in, then you can donate a good wedge of cash to the funds!

And if you want a fundraiser kit to support your efforts, you can order them here, for free!

Where do the Funds go to Raised by Red Nose Day?

When you get involved in Red Nose Day, you are actively supporting Comic Relief to bring relief from poverty to communities across the U.K and on an international level.

Since Comic Relief was started way back in 1985, they have raised in excess of a staggering £1 Billion all thanks to the people getting involved and giving up their time to support this amazing charity.

Comic Relief supports campaigns for kids promoting mental health awareness, (a topic that is high on the national agenda), by investing in therapeutic services, anti – discrimination work and influencing changes in policy and procedure.

The charity has also worked with refugee children from places such as Syria and Afghanistan who have had to flee their homes due to war, persecution and torture. Many witnessing things no adult should see, never mind a child. Some have lost their parents or their siblings, and it is only with continuous support from the donations they receive, that Comic Relief can help these children.

The money raised from Red Nose Day also goes towards building safe homes for people made homeless by war, or those who have fled violence in the home both in this country and abroad, as well as providing education and resources for those in need.

For more information about Comic Relief and Red Nose Day and the work they do you can find it here.

Meanwhile, if you are thinking of getting involved or you have been inspired to raise funds in some weird and wonderful way, why not let us know? We’d love to see your pictures of the FIFA-Thon, or the giant Red Noses all around your offices! And if you need I.T Support from a friendly bunch of experts with years of experience and knowledge, then contact us here or call us on 01282 506 616 to find out how we can help you get the most out of I.T to support Red Nose Day. Meanwhile, we are off to get our t-shirts and sit in a bath of baked beans!