Should You Be Worried About Encryption Viruses? 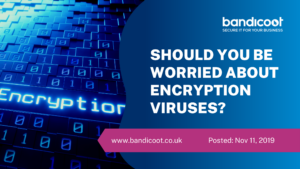 Here at Bandicoot Towers we recently spoke about email encryption and how important it is, so this week we thought we would look at encryption viruses.

What Is An Encryption Virus?

In the early days of computer viruses, they were relatively easy to detect, as long as the computer had a virus checker.

Then came the encryption virus. These viruses try to hide from being seen or detected by rearranging their program code so that it has to be unencrypted to be discovered and removed.

Encryption viruses are particularly clever and use a different code ever single time they infect a computer or file, which can make them very difficult to detect.

The first known encryption virus was the cascade virus, which was created and discovered in the late eighties and early nineties.

Once a computer was infected the virus would make all text on a screen fall down to the bottom of the screen, hence the name cascade.

The most important way to stop encryption viruses or any other kind of viruses from infecting a computer is to install antivirus software.

There are many paid for virus checkers available, each with their own particular strengths and benefits, so it really does depend on personal choice as to which one to choose.

The good people of ITProPortal have reviewed the best products available here so that should help to narrow the choice down a bit.

There are also free antivirus software packages available, again there are possibly too many to chose from, luckily PCMag.com have reviewed loads of them so you can have a look here to see which one you would prefer.

Of course, here at Bandicoot Towers we know all there is to know about everything to do with viruses and can provide you with a free Security Audit to help you decide what would be the most suitable security options.

Keep Antivirus Software Up To Date

We’ve all been guilty of seeing the ‘a new version of such and such is available click here to update’ pop up on our phones and laptops and thought ‘I’m too busy for this, I will do it later’.

Which is fine for some software applications but definitely not for antivirus software.

As computer hackers are constantly looking at ways to get passed or over the antivirus wall, users need to be looking to update their software as often as they can.

The best antivirus software packages (like we mentioned above) will be releasing frequent updates.

There are new computer viruses being released pretty much every day. In fact, having just googled it as we write this blog, there are several news stories about data breaches on the first page.

We probably spend more time telling people to back up their software than we do anything else.

So, in case this is your first visit to our website, back up everything!

With the best will in the world it is impossible to be 100% protected from a virus. So, by making sure that you regularly back up your software and hardware, should you be unfortunate enough to have a computer infected, you can restore everything back to normal as soon as possible with as little disruption to your working day.

Along with antivirus software, it is important to run regular security scans on your computers. Most computers have inbuilt security systems that will frequently run in the background.

But some may not, so it is worth having a look and getting it scheduled at least a few times a week.

If you aren’t sure and would like us to check then please do let us know and we will help!

Annoying as the legendarily lengthy windows updates that tend to kick in when you are super busy are, they do need to be updated as soon as possible.

Hackers will always be looking for vulnerabilities in operating systems and as they are reams and reams of code involved, an operating system is an ideal place for a hacker to try and ‘get in’.

So, for that reason try to keep any windows or mac operating systems up to date as often as you can.

If you do want to find out more about encryption viruses, antivirus software, how to back up systems and software, or anything I.T related then please do get in touch.

here at Bandicoot Towers we are more than happy to talk you through all of the options available and the services that we provide.