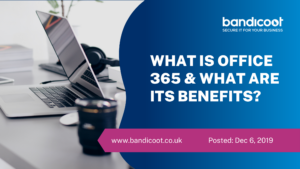 Office 365 has been around since 2001 but some people are still using their old Microsoft Office software packages. So, this week here at Bandicoot Towers we thought we would have a closer look and answer the question what is Office 365 and what are its benefits?

For more in-depth information about the new and existing Microsoft applications that are included with 365, the good people from collab365.community have produced this clear, concise and handy explainer.

What Is Different About Office 365?

365 differs from previous versions of Microsoft in several ways. It is the first cloud-based version of office. All the other versions of Office require software installation.

Secondly, 365 is the first subscription-based release of Office. So, instead of paying a pricey one-off upfront cost, a smaller payment is taken per month.

365 also comes with its own cloud-based storage and email hosting space, instead of what used to happen where users had to store documents on their own hard drives.

What Are The Benefits Of Office 365?

Because 365 is hosted online it means that anyone using it always has the latest version, as Microsoft can continually update the software from their end.

With 365, Microsoft has certainly made a concerted effort to ensure that all the office applications are linked together, to make for more effective team and online collaborative working.

As 365 is all cloud based it means that collaborative working can be carried out anywhere and applications such as the Outlook calendar being shared along with distributed tasks, allows for the better organisation of projects that are shared by different teams, groups and outside contractors.

How Does Office 365 Compare With G-Suite?

These days Microsoft doesn’t have the Office application world to itself of course. Although it’s historical competitors such as Libre Office have not yet ventured into the cloud-based world, Google has.

Both Google G-suite and Microsoft Office packages share similarities, and both have free entry level versions.

It does come down to personal taste really, much like whether you prefer to use an iPhone or an android phone.

For us, the Office 365 subscriptions and applications just about shade it, also Office 365 allows for desktop versions of its applications whereas Googles G Suite is solely cloud based.

For one thing it is good that both Google and Microsoft are keeping each other on their toes, it certainly means it is a win-win situation for the users of both!

There isn’t a day that goes by without a data breach story being reported in the media, so quite understandably, when businesses are looking to purchase software they are going to want to know that their data and information will be stored as securely as possible to reduce the risk of and data being leaked or stolen.

Because Office 365 is cloud based, this has naturally led to potential customers asking how safer is their data going to be?

The answer is very. While no system can accurately say that they are 100% impervious to a data breach or virus attack, with Office 365 users will have all the added security that their data is being held on Microsoft’s servers. As one of the biggest IT companies in the world it makes sense to take advantage of the high security that comes with their huge investments in information security.

Unlike some smaller data security companies, Microsoft will offer 24-hour protection and they don’t rest on their laurels either.

Dedicated Microsoft teams will be constantly updating and evolving the security processes and secure data centres.

Of course, Office 365 also comes with antivirus, anti-spam, and anti-malware software. Also, as we wrote recently, Office 365’s Message Encryption functionality allows all users to send encrypted emails to everyone. Regardless of the email software or hardware that the receiver will use.